Are you in the market for a newer, faster computer, or perhaps thinking about upgrading your current one? Computers should be so advanced these days that anything you do on them should happen almost instantly. The introduction of Solid-State Drives, or SSDs, is the easiest and most effective way to speed up any computer. If you’ve never heard of SSDs before, then continue reading for some of the main benefits that they provide.

The first and most obvious SSD benefit is that they provide a much-needed boost of speed. While Solid State Drives have the same function that regular hard drives do — storing files and other information — th 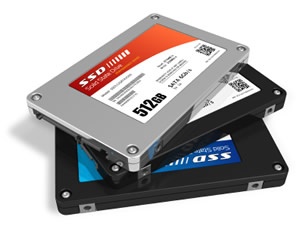 e way they go about doing it is much more efficient. While traditional hard drives have relied on spinning discs that use magnetism to store information (in addition to many other moving parts), an SSD simply uses electronic signals to store data. There are no moving parts in an SSD.

The speed increase is impressive. When you install a Solid State Drive in a standard computer, you can expect it to boot up in 10 seconds or less in most cases, as opposed to the 50+ seconds that traditional hard drives require. Opening programs like Adobe Photoshop or Microsoft Excel is almost instantaneous.

Not only are solid state drives faster than traditional hard drives, but they’re more durable as well. As mentioned before, an SSD has no moving parts that could break if it’s dropped or shaken. While a traditional hard drive could be broken beyond repair, including data loss, in those situations. Also, while regular hard drives have a tendency to wear out over the years, an SSD is manufactured in such a way that most consumers can expect consistent performance over time.

If you are still using a conventional hard drive, there has never been a better time to upgrade. Prices for SSDs have finally dropped to under $1 per Gigabyte, making them one of the best hardware upgrades available.

If you’ve been wanting a way to speed up your computer, or to guarantee that your new one is fast, pick up a Solid State Drive. You’ll be glad you did!