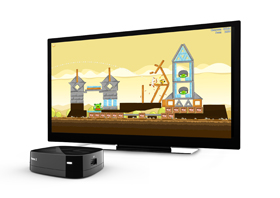 One of the most popular ways to stream movies on your existing television is through the Roku set-top-box. It was recently updated to version 2, and now starts at an all-time low of $49.99. The Roku was one of the first set-top-boxes that enabled you to stream movies through Netflix without a computer, and it was also one of the first to allow the installation of different apps. It has since grown to become one of the most affordable ways to stream movies through your TV. HD lovers will be glad to know that the new $49.99 box supports 720p, while the $79 and $99 models support 1080p. The $99 box includes a full version of Angry Birds that you control with the Roku’s new motion controller. Currently, Roku is offering an Angry Birds limited edition box that normally sells for $119.99 — at $99.99. 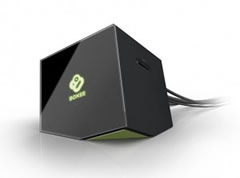 If its apps you’re after, Boxee is a great choice. The company started out by offering a free open-source version of their software, which enables you to turn your PC or MAC into a movie streaming box. The setup costs you nothing, and is easy to do. All you need is a computer with a video out connected to your television and you’re almost ready to start using Boxee.

Boxee Box on the other hand is a standalone solution that is very similar to the Roku. The Boxee Box will run you $179.99, which is a bit higher than some of the other offerings. It lacks motion support within the controller, however, it sports a full QWERTY keyboard located on the backside of the remote. The Boxee Box supports 1080p, hundreds of apps (Netflix, Amazon VOD), and includes an HDMI cable in the box.

The Google TV platform was introduced in 2010, and has since lost much of the hype it started with. However, things have recently changed as Google updated the software to fix many of the issues people were complaining about. Google TV is different than the other options mentioned above, because it can link to your existing cable or satellite box. Once setup, the user can search for TV shows, movies, etc using both your existing television provider or the internet.

With the recent software update, Google enabled the ability to install apps from the Market, which means that Android users will more than likely fall in love.

Our suggestion is to purchase the Logitech Revue Google TV box. Logitech recently lowered the price of this box to $99.99 from $249.99 because of poor sales. Now that the box has been updated we really feel that it’s a steal. It comes outfitted with a full-size QWERTY keyboard and a built-in touch pad. Google TV supports all the major apps like Netflix, Pandora, CNN Money, Fox News, and a whole slew of games. If you have a geek in the family, he or she will truly love this set-top-box.

Last and certainly not least we have the Apple TV box, which is the most common choice for those that already own a Mac or iPhone. The system is tightly integrated with iTunes, which means you’ll be buying most of your movies and TV shows a la carte — unlike Roku, Google TV, and Boxee. While the box supports apps like Netflix, it does cost more to watch the premium content. That being said, Apple does offer newer content that you can’t find on the other boxes.

The latest version of Apple TV will cost you $99, and it’s compatible with iCloud. If you’ve spent money buying music in iTunes you will love the syncing capabilities within iCloud. It’s also worth mentioning that the Apple TV box and remote reflect the quality you’d expect from an Apple product.

We have four affordable ways to enjoy internet television. It’s up to you to decide which one will make the cut. Netflix is available on every box mentioned, if that is your primary concern, and only one of them starts at a price that is above $99.